I used to be a cook. From 1971 to 1986 I was a cook at the Leeds General Infirmary. In fact from 1983 to 1986, I was the Head Cook in the staff kitchen. All this is a little bit of background information for what I want to have a chat about. That chat is about pastry. Specifically short crust pastry. Now, when you watch these famous TV chefs preparing pastry (and I’ll not mention any names here) they will always tell you that it has to be done by hand .. No mixer/processor allowed!!! .. They will tell you that your pastry will be tough/dry/chewy and any other descriptive term for ‘bad’ pastry they can think of. They will tell you that you have to make it by had, if you want the best pastry. I want to tell you that’s a load of rubbish. When you are making enough pastry to cover pies that are going to feed 300+ people, making it by hand is a non-starter. Can you imagine trying to ‘rub-in’ 20lb of lard/margarine into 40lb of flour by hand!. You have to use a machine. If it works for large volumes, then it has to work for smaller volumes too. So here is my recipe for short crust pastry in a food-processor:

They key to this is the speed of the processing and the coldness of the fat. I takes less than 2 minutes to go from fat and flour to pastry, which means that the fat is still cold. I can assure you that it does work.

March is going to be an expensive month I think. Firstly, there’s Mothers Day and then there’s K***s birthday. This is one of those significant birthdays too. The big ‘six-zero’. Looks like I may need to move some cash from my savings account, but it should not be a problem really. We are going away for a couple of days on the weekend before the big day which will be nice. We’ve been to the hotel before a few years ago and it was a nice place. Good food, good scenery and it will be relaxing break for both of us. R*** is away for the weekend, so there are no worries about getting back for him. Just got to hope the weather is better than present. It has got a lot warmer overnight which has led to the snow staring to melt into slush. Much fun! 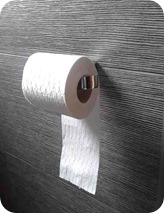 Now, here’s a poser. Which is the correct way? Front or back?  Is there a right or wrong way? I have no real preference at all but I know how K*** feels about it. For her it has to be Front. There can be no argument and it can lead to a lot of tutting if I put it the wrong way around. I’ve been in houses that drop down the front and houses that drop down the back. I’ve also been in places that have different preferences in different rooms. I’ve also been in houses where the loo-roll is sat on the cistern behind, which is an odd if not difficult location. So this is not a poll, just wondering that’s all.