It’s not been the best of starts technology wise, today. I got and realised that my new iPad had not been on charge overnight. That in itself was not too much of an issue, as this new tablet seems to hold its charge very well. No, the problem I had was that the screen had frozen. Not only that but I could do nothing with it. All the ‘help’ sites told me to power off the iPad, but the power switch did nothing. So it wasn’t just the screen that had frozen, but the entire tablet just did nothing. You may be able to imagine the string of expletives that were forthcoming.

Nothing that I tried worked. I had a vague recollection that you could connect an iPad to iTunes on a laptop and ‘do something’ but couldn’t remember what, so I gave it a go. I was still at the time searching online for any sort of help and I came across a site that explained that whilst connected to iTunes, if I held the power button down and tapped the home button, this would refresh the screen. It was a work around for older tablets, but I had nothing to lose. Remarkably, it worked! I was ‘back in the room’ I think the phrase is.

Mrs Me wanted some cleaner for her contact lens’s. I checked on eBay and there was going to be £10.99 plus £6.00 postage, which made it more expensive then going the opticians and buying it. Now I rarely use Amazon as I often think their prices are a bit on the high side, but I checked and they had the product, and it was selling at £13.90 postage free. So, I ordered some. Then I got an email saying that my payment had been declined. I thought I had set up a PayPal payment option, but it seems payments are direct from my debit card, which had just been updated/renewed, so the expiry date was incorrect.

So all in all, not a good start.

Yesterday, I had this idea. I wondered that, if my birthday was not visible on Facebook, would anybody outside my immediate family  mention it. So I edited my profile and mad my DOB private. I was correct in my thoughts. Not one message. Sad really, that the only way people remember an event, if social media tell them.

Of course, it could be that nobody actually cares enough to post anything. To counter that, at 13:30, I made my DOB public again. Let’s see what happens now!

It was never going to be easy. People have different ideas of what a family holiday is all about. With 10 different people, although the same family there will always be some mild conflict with what people want to do each day.

This one has been exasperated with problems surrounding the accommodation. First there was a problem with the heating, to the extent that there simply wasn’t any on. Then the internet went down which meant that the heating, 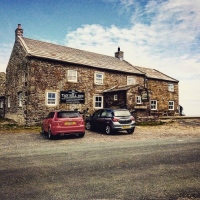 which is controlled via the internet couldn’t be changed. Then yesterday, the power went off.  Luckily the evening meal was cooked, but 10 people trying to eat at a table with only one smallish candle was a sight to behold.

However, all is good now, but there is still an issue with the heating.

We went to the world famous Tan Hill Inn. It is the highest pub in Great Britain and also the highest point on the renowned Pennine Way. It was really busy, full of walkers and general tourists. Me and K*** just had a sandwich between us whilst S**** had one to himself. The food was okay, nothing special but we just went there for the atmosphere. It was a shame that the Tan Hill Ale just finished as we got there, but we had a nice pint of Timothy Taylors Landlord.