Things did start to get better as the next few years progressed. Staff realised that I was not the ‘bossy’ type that the previous occupier of the post.

In 1991 the Government decided to ‘de-criminalise’ parking offences. The Road Traffic Act 1991 (RTA), allowing local authorities to issue parking tickets for contraventions such as: parking on yellow lines, footway parking, not displaying valid pay and display tickets or parking permits within a Controlled Parking Zone (CPZ). Leeds were now starting to look at the pros and cons of this new legislation. But before that could happen, Leeds needed a new processing system. I was asked,

because of my ‘technical knowledge’ to be part of the team that looked at the different systems that were available. Unusually for me, I asked what it was worth? The manager had been expecting this and offered me an upgrade in scale to S5. I remember sitting there pretending to think about and then, even more unusual for me, I countered with ‘”Could you make it S6?” I think he had been expecting this and he agreed, there and then.

There were many trips out to various Local Authorities to see their systems and to talk to users before we settled on ours. One of the the things that kept cropping up, was residential parking, or parking outside your own property. As more and more

people had cars, and the cost of parking those cars increased, many drivers took to parking in residential streets, much to the annoyance of the local residents. To try and overcome this problem Local Authorities set up Residents Parking Zones which allowed the residents within that ‘zone’ to obtain a parking permit(s) for themselves and visitors. Leeds were using card permits that were hand written with any required details and they did not look very professional.

The new legislation would give the Council control over the parking in these Residents zones, and 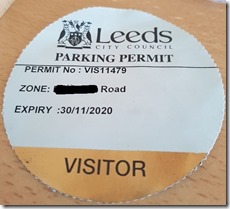 it was decided that any new system would have to be able to cope with the issue of more accurate and professional permits. This also meant that jobs and job titles would have to change. Parking Attendants became Civil Enforcement Officers, clerks became Customer Service Officers and a new team called Appeals Officers was created. The new system used mail-merge for the first time to create individual and personalised letters. This meant that we could now send parking permits that were no longer hand written and could not be easily forged. It became one of my jobs to both design and implement these new style permits when we were ready to take on the new service. That new service started in 2005 and things started to get better for everyone.

The above refers, of course, to the Mighty Whites 2 – 1 win over Norwich

City this evening. It was a good game, well at least the first half was. Mrs H wanted to Masterchef and House, so I missed of the second half. I managed to get a sneak peek, at around the 70 minute mark, but they were still 1 – 1. In the old days, and by that I mean the past few years, Leeds Utd would be already for going home, and that’s the time they used to lose the game. Not any more it seems. Simon Grayson appears to have convinced the team to play to the final whistle. It is paying off.

would. The ‘wet’ part

has dried up, but mow I seems to have got the chesty cough back. It’s been a bit heavy going this evening. I’ll slap a  good dollop of Vick’s Vapour Rub on and a splash of Olbas oil should help me sleep.

I have taken to putting random statements in the status of my facebook page. For the most part, people have taken them for what they are … random, meaningless statements. However, on a couple of occasions, a certain ‘friend’ appears to believe, that I am having a pop at them. Some people take facebook way too serious.

Work went quite well. I have a fair bit to get through this week, what with the permit renewals. There are about 9 different zones to renew. Some are only a few properties, but two or three have a couple of hundred properties in each zone. So a lot of work, for quite a few people over the next few weeks.

As I hoped, I managed to get Wednesday afternoon off as flexi time. That is when R***’s consultant has decided to come and see us. I am not looking forward to it at all, as I feel I know what he is going to say. Still I will listen to what he says, and then we will decide. R*** has been in a strange mood really. One minute laughing and singing, the next holding his ears and ‘droning’. It sounds like he has had a good day at school though.