As the title says, I’m ready for the grief I may possibly get.

I want to talk (moan) about dogs. More specific, dog owners. What is it with these/you people? Just because you are a dog lover, it doesn’t automatically follow that I’m one too. In fact, I can’t be doing with the majority

Take my neighbour (please). He has two spaniels. Now both are well behaved and both will respond to his commands, but I’m not interested in either animal. So I get quite upset when the bl**dy animals start jumping up at me when they see me. He has a bit of a bad leg, so by the time he has hauled himself out of the local field, where he walks to dogs they are already hyped-up. I don’t think there can be anything more revolting than being licked by a tongue that has been God knows where before hand.

Well at least one cat anyway.

I was just having a cup of coffee and nosing around a couple of websites, when I heard K*** say “Oh my god. What’s happened up there?” She was in the kitchen, and ‘up there’ referred to the decking at the top of 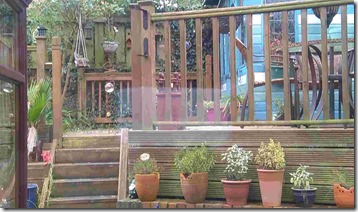 the back garden. I wandered into the kitchen and then realised what she was talking about. The whole of the top deck was covered with feathers. K*** thought it must be a cushion of some kind, but as soon as I got to the window, I could see that there was a dead young pigeon and an older one trying its best to eat what was left.

I knew what had happened straight away. At the back, there is a railing, just in front of the fence, There is a neighbours cat that sits on this rail waiting for birds to land on the back fence. It then leaps up and tries to get the bird. It usually fails, as the birds seem to be faster than the cat, if not smarter. On this occasion, the cat won the day.

What annoys me is that cats are allowed to roam free! There are no restrictions on cat owners that are similar to the restrictions on dog owners. Whenever I have brought this up in conversation, I get ‘reminded’ that “… cats have a free spirit…” and that “… cats bury their poo, not like dogs …” What seems to happen is that as soon as the owner gets up in the morning, they let the cat out, and it does not come home until it gets dark. I think that is wrong! Cat owners should have the same responsibilities as dog owners have. Cats should be kept under control. Only last week, when driving home did a cat run out into the road and was nearly run over. If K*** had not been slowing down, then the cat would have been history.

I’m trying to not let it bother me, but t does slightly. I’ve been trying to contact a colleague. Nothing serious, but I don’t want to lose touch with the few real friends I had at work. I have known and worked with D*** for 6 maybe 7 years, and we always got on really well. Now there may well be a simple explanation, but he has not replied to any of my emails, and the text to his work phone went unanswered too. I have initially put it down to him having a new phone number and the possibility that the email I have been using is being blocked by the works server, for whatever reason.

It’s been an interesting week though. S**** and A**** have been doing behind the scene work for this years village pantomime. K*** invited them both round for dinner on Wednesday and Thursday, to save them have to drive to and from their home. She picked S**** up from work and they did a few jobs that he needed to sort out. They arrived back here at around 4ish, and S**** had brought A****’s dog! Now, I may have mentioned this before, but I’m not a huge fan of pets, and neither is R***, so I was a bit surprised when he walked in. The dog in question, is a miniature dachshund. No more than a foot long, but quite hyperactive and giddy. S**** was a bit concerned about leaving the dog for the whole evening. I was more concerned about what R*** would do. In the end, he was fine. Very tentative when the animal was around, and he did not like when it startled him, but he coped.

I have spoken before above how R*** sleeps with his television on all night. We think it’s a comfort thing, but nobody knows for sure. So at 8pm on Friday evening it came as a bit of a shock when his TV started to go to ‘standby’ and would not say on. I tried all sorts of ‘fixes’, none of which worked (they never do) before Googling the issue. The replies I found indicated that it was more than likely to be something called ‘ the volt caps are overheating’ whatever that meant. Basically it meant it was broken. It could possibly be repaired, but the chances were that the repair wouldn’t last long and that the cost of the repair, if we could find someone to do it, would be as much as the cost of a new one.

We had a bit of a melt-down, whilst we tried to explain that we would get him a new one in the morning. He could not understand. For a couple of hours, all we got was ‘dad to fix it’ and ‘television on’. His medication eventually calmed and settled him, but it was a tense night. K***’s biggest worry was that she would not be able to get a new one on the Saturday morning. My worry was that it would not fit in the room as although K*** had the details, she was toying with the idea of getting a bigger one.

This particular story ends in success though. New TV purchased (right size too), fitted on the wall (same fitting as before), installed and up and running within 30 minutes.

Then we had to get him used to the ‘dog’ visiting again. This time from 1pm until late. Again he coped very well, but I can’t help wondering what he would have been like if we had not got him a new TV …

It is just to see what they look like, but I have put up my knitted Christmas decorations.

I’ll explain what I have done here. On the right we have 5 small Christmas stockings. Each one has ‘candy cane’ in it. On the left we have three white bells, each one has one of those tiny dog collar tinkle bells as the clapper. So they actually make a noise. It’s taken a coupe of weeks, on and off, to get them finished, and I have to admit, they do look quite good. Feeling quite proud.

*** Now this I find interesting. Since starting this post, I tried to send an email to my old work email address using the email address I had been using before. I got no acknowledgement or anything. I then tried sending to the same address from a different email alias that I use. This time I got delivery failure message, which basically means that my work email account has been deactivated. So why didn’t I get the same message with the first email? Does give slightly more evidence that that particular email address is being blocked.

Well back to work tomorrow. In some respects, the week seems to have flown by. In others it dragged a little. The drive there was quite reasonable. It was all motorway, M1, M62, M60, M61, M6, M55 with a short distance on an a road at each end. I don’t mind the motorways. I don’t seem to get a frustrated on M roads. We only had one hold up. It lasted for about 40 minutes and was due to some kind of spillage on the M6. A couple of very stupid girls in the jam. Sat in the middle lane, music on full blast, bouncing up and down in their seats. Suddenly the passenger opened the car door and started dancing in the middle of the road. Stupid.

Weather was kind to us though, no rain to spea

k of until Friday, but quite windy. I caught a bit of sun on the the Thursday and Saturday. On Tuesday we did the walk from the lake at St Anne’s to Lytham which was nice. Wednesday saw us in the Blackpool Tower. We went to the circus, but it was not the youngest’s type of thing. He lasted an hour, which was not bad for him. It is not the same though. I was quite disappointed with the whole show. The clowns seemed to reply more on vocal humour than the slapstick. Mind you, no body can come close to Charlie Caroli, and I think was expecting too much. Thursday was a trip to Marton Mere. We saw the leaflet last time, but never got there. Interesting place. It seems it

is a 10,000 year old lake. One of only two natural lakes in Lancashire, and it was remarkably clean and litter free, despite  being next to a caravan site.

Saturday, saw us back up at Lytham/St Annes again. A different walk this time, and a lot less windy. Here comes the rant

… I get sick of seeing dogs everywhere. I worked it out, every third person/couple/family had a dog or dogs. They all seem to be on extremely long leads, when they are on leads at all. I never remember seeing as many dogs when I was a kid. And talking of kids (rant part two), why are they so noisy these days. Always screaming, and out of control. not like when I was young……… showing signs of age now.

One annoying thing though. I like to walk through the Pleasure Beach at Blackpool. Very rarely go on any of the rides (too pricey these days), but I enjoy marvelling at the amazing

attractions. Not any more …… there is now a £5.00 charge for people just to walk round. So that means, those who go with their kids, and look after the bags and prams, now have to pay for the privilege. An absolute disgrace, and I think may be a wrong move, as I think some people just won’t go.

All my plants/seedlings were okay. Eldest had done quite well there. The house was okay, no problems there. Just one problem, but we talked it through, and I think he got the message.