There were three trainees started in 1971. The previous year there was only one, so the money the department had saved could be used the following year. Those were the ‘good old days’ of the Health Service. For some reason, I started on the 23rd of August, with the other two (A****w and D***d)starting the following week. It caused a bit of friction with A****w when he realised what had happened. That year the August Bank Holiday was Monday the 30th and Tuesday the 31st. Me starting the previous week meant I was paid for the two days holiday. A****w and D***d started on the 1st September and as such were only paid from the 1st giving them only three days pay that first week. He never let me forget it either.

would be ‘Day-Release’. this meant that one day a week I would go to the local catering college to learn my trade. The college was based just outside the city centre and was named after the first Lord Mayor of Leeds, Thomas Danby. There were other parts of the college dotted around Leeds but the first one I went to was on Whitehall Road. It is now a part of Leeds city Council, but that may and probably will change in the future as cuts may force the sale of the building.

College was a strange beast, throughout the four years. I would say 95% of the students in each tutor group of the college, were from either hotels or restaurants with majority being from some of the larger hotels in the region. This led to a great deal of snobbery from both the students and to some extent, 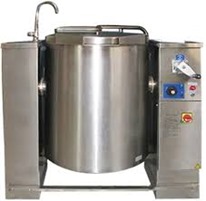 many of the tutors. Students from the ‘industrial’ side of catering were looked down upon as not proper chefs. We would all learn how to create a basic white sauce in a 1 pint pan and then I would go back to work and have to create 40 litres of the sauce using an industrial sized steam boiling pan.  This was something the other chefs could not even imagine, let alone know how to use. We were like the second class citizen of the catering world and this went on throughout the four years of training. But we just got on with it.

One lad, D***y had the problem really bad. He worked in Birkbecks, which was a café in the Leeds Market. The type of food they sold was typical of cafes 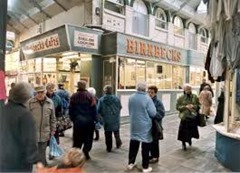 of the time. Boiled ham sandwiches, bacon sandwiches full breakfasts, sausage and mash, pie and peas, although never fish and chips. It was the food that, at the time was what market traders and customers wanted.  It was good filling food and nothing fancy. He had a none too flattering name for the restaurant and hotel cooks … he called them “Lardys” because he thought them to be a bit “Lardy bloody da!” The name stuck with me for years.

In the hotels, the trainees would move around the different cooking sections from time to time. One point they would be in the bakery or sweet section, then later they may move 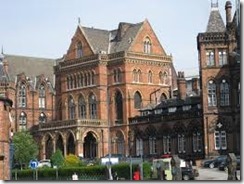 to the starter section and then maybe onto the fish section. The same happened in the hospital, but whilst I was training, we tended to move to different hospitals to learn the different skills. Leeds had two large main hospitals, St James and the Leeds General Infirmary (LGI). I worked at the LGI. But the wider Leeds had many other smaller hospitals, where we would learn the different aspects and diets associated hospital catering. All have gone now, but during my 4 years training, I spent time in most of them.

There was Cookridge Hospital which was a major centre for radiotherapy along side the IDA hospital. I spent 2 weeks at one of them learning about the diets for patients with cancer. There was the Leeds Womens Hospital which only admitted women patients.  The Leeds Maternity Hospital was the place I finished up in after my training. It had

great staff and a family atmosphere that the other places didn’t have. Another place I worked in, during those first four years was a hospital for people with mental health issues. High Royds or Menston Hospital, as it was sometimes known, was a secure hospital for the most severely affected patients. What could I learn here you may ask? Well this was the place I learned my butchery skills of all things. Most of the smaller hospitals did not have butchery section, so the meats were prepared at High Royds butchery for them. I was there for six weeks and had one of the best times.

At the end of the training, we were allocated to one of the the three kitchens in the hospital. Unfortunately (or fortunately) that year there was only two vacancies. I was shipped off to the Leeds Maternity Hospital to cover a staff member who was on long-term sick. I spent a very happy 12/13 months there before being forced back to the LGI where a vacancy had become available.

Next time: back to the LGI

I got home in good time tonight. The roads were a lot quieter than was anticipated. I had visions of 10 miles queues

on the A1, after the problems last year. This morning was quiet too, although going north, the A1 was very slow and crowded. The Leeds Festival gates opened at 3am this morning, and as I understand it, there was a steady flow from about that time. S**** was dropped of at his friends house, around noon, and they were going from there. Although the whole thing does not get going until tomorrow, there seems to be some music playing this evening. It will be a bit of a test tomorrow afternoon. I need some petrol, and both the petrol stations that I use are on the A64. Not a road I want to go on, as part of it will be still be closed. I also need a haircut, and the hairdresser’s is also on the same route.

Never got around to installing the new RAM this evening. It looks like it might be over the weekend sometime. I also need to work out when I should download the Office 2007 software. I think it may be a good idea to try on Sunday night, before the Bank Holiday. Still cannot get over the price. I hope that it downloads at a reasonable speed. I have an idea that download speeds sometimes depend on the site they are being downloaded from. It can take ages sometimes to grab a YouTube video.

My new phone seems to have a lot better signal in the office. I have only noticed a signal loss a couple of times, and considering where I sit, and the amount of metal cupboards and electrical kit around me, I’m surprised I get a signal at all. Talking of electrical stuff, we have the Portable Appliance Tester (PAT) with us this week. And before anyone asks ‘Portable Appliance’ refers to desktop electrical equipment such as computers, desk fans etc, not ………although I do not know how portable a three drawer laser printer is. Well, it has to be the most boring job an electrician can be asked to do. As far as I can see, it is only the cables that get tested anyway. But it takes the guy forever. It’s my desk tomorrow. The last time, it took the tester nearly an hour to get through all my stuff, and he’d been doing it for years. The man we have today, has only been on this since last week !!!!

What a horrible Bank Holiday Monday it has been. Rain all day, and cold too. It has been a strange weekend really. The youngest has been fine all three days, which was a help. The eldest……well that’s another story. He left his wallet at work on Saturday, he hopes. Then Sunday night him, his girlfriend and some friends went to the pub, then onto the friends house later. Did not get in until 3:30am. Then his girlfriend was ill all night, and this morning had to Harrogate for 11:00am. We left at 10:41am !!!!!!! I think I did pretty well to get them there for 11:10.  I thought he was going to burst into tears when he got in my car. He looked so depressed, and she looked upset too. so what could you do or say ? He had not even said goodbye. I told him to either say goodbye or go ! So he went! He was supposed to come home with me, but he decided to go out with them for the day, and stop the night. It is very upsetting for Mrs H.

It’s a four day week for the next four weeks. A leave day, another Bank Holiday and my hospital appointment. I could get used to this. Dentist tomorrow though and this time I need some work doing. I think I lost part of a filling. The tooth is quite sharp and was a little sensitive a week or two ago.

I put the new wheel trims on yesterday. They look very good. I also tried putting the graphics on, but that was not as successful. I got one on, but it did not look right. In fact it looked quite tacky. Not at all like I expected, so I took it off straight away.

Still no sign of Mrs C on MSN. As before, she has been in facebook, but not at the same time. I’ll just check MySpace ……nope not there. I’ll tell you what though JM left a tweeted at around 6:00pm that she was having a nap, and would someone text her at 6:45pm. So I picked up her mobile number from facebook and sent a text at around 6:50pm. Thought no more of it, until she replied back by text to say thanks. I was amazed … the power of Twitter I suppose.