I’m forever downloading free apps for my phone, iPad and even my laptop. I hear or see someone mention some piece of software or app and immediately think “… that might be useful or fun or whatever …” They very rarely are and I usually end up uninstalling the things and questioning what I was thinking!

Here’s an example: I received an email regarding a regular local meeting that was due to be cancelled. Within that email, was a link to what seems to be a ‘collaboration hub’ called Slack. As mentioned I thought “that might be good for…” although I cannot remember what I thought it would be good for. But me being me, I downloaded and installed the software.

I then spent the following hour, firstly trying to understand how to use the program and the next 20 minutes trying to figure out what I would do with it. As a result, I think it is a piece of software that would be useful in a workplace environment or a user group, but I don’t think it was for me. I mean, who do I need to collaborate with?

So I needed to say goodbye and as usual my trusty copy of Revo Uninstaller comes into it’s own. It’s one of the very few pieces of free software that I have kept for a long time. It is so easy to use, and I haven’t used half of the features. I often think I should cough-up and pay for a full copy, but as it works as is, I think I will stick with what I’ve got.

I have been using the WordPress.Com app for Windows 10 for a few weeks now. It’s okay when it works, but there have been a

couple of issues recently. For example, it is often very slow to to open. Sometimes posts do not update straight away and on a few occasions it has been known to simply crash and require a computer restart.

Usually faults like this can be rectified by reinstalling the latest version. However, attempting to download from the Microsoft Store results with a message telling me that the app is not available. Very strange, as version 3.2.0 is available to download direct from the WordPress.com website. I’m not the biggest fan of the Microsoft Store, but I would have thought an app such as this would be available. Is the reason that there are too many issues with the app that Microsoft no longer want to be associated with it? I don’t think that could be reason as there are many other apps in the Store that are simply rubbish. No there is some other reason that I’ve not quite figured out yet.

I still have the original version and will re-install it and see if is any better for a clean install, but I have my doubts.

Yep, I’m full of cold. It started with a bit of a cough at the beginning of the week and it’s now reached the ‘messy’ stage. Problem is, that on Saturday, we are all going for our annual ‘flu jab’. I’ve been told, that with any prosthetic heart valve, the flu vaccination is a very good, if not essential idea. Not sure if I will be able to have it. Certainly don’t feel up to having it at this precise moment.

We went to church on Sunday. Not such a big thing you may say, many people do. I used to go often when R*** was a lot younger, but as he has grown up, getting out of the house on his ‘days off’ is a big problem. I can understand too. He goes off to his daycare centre Monday to Friday, so on the weekend, all he wants to do is be in his room, doing the things that he likes to do. A bit like most of us really. If it’s not something you have to do, then why do it? Anyway, he was on respite at the weekend, and it seemed such a good opportunity to go. It was interesting seeing people that we know, but have not seen for a while. We are looking to go again on the 5th November, when R*** is on a weekend respite again. This could become a regular occurrence.

Now the bathroom is finished, I’m looking to start on some decorating. I need to tidy up the paintwork in the bathroom, (ceiling and door frame to be precise) but want to have a good go at it without too many break-offs. R*** goes on respite again on Monday, so I could probably do that in one day. I then need to start on the staircase. There is not a lot to paint, but it will be the access that will be the main issue. Hopefully, if I can crack on, I should get it all done before he returns of Friday afternoon. Ideally, I’d like to have all the work done by the end of Thursday, but that may be pushing it a little. It’s all in the planning! I’m thinking though, that the doorframes, may have to wait until the following week.

** I have just discovered the ‘Preview’ button. This seems to work as a draft mode, allowing me to check what the post looks like before posting. So no real need to post a draft first. I have also just found the Windows Store ‘WordPress.com’ app. So the next post will be using that (if I can remember) **

I’m a bigger fan of the Android system, rather than the iOS system. So I have never really had anything to do with an iPad as such. Often have had to troubleshoot Mrs H’s and R***’s iPads,but only by Googling the issue. I have never had much knowledge of the product at all.

I decided to buy Mrs H a new iPad, out of my retirement payout, as hers had got very very slow over the past few months, almost to the point where it was unusable. I then thought that it might be a good idea (full of those) if I had one also. Now R*** has two iPad Minis. The intention was that he would have one at home and take the other when he went on respite. But he wasn’t keen on that idea, and will not take it with him. Mrs H took the notion that the other on was just sitting there and that I should use it, to “… see how I get on …”. Well I’m getting on just fine and am beginning to use it a lot more.

And so to the point of this post. I was looking on the App Store for an app that I could use to write a post with and came across Blogpad Pro, which it seems is the recommended app for blogging on WordPress. So I downloaded it and you know what … those recommendations were right. It seems to be just what I needed to blog on this iPad. I was well impressed. I am so impressed, that I decided to with this post in praise. I still have a lot to learn, but it seems to be fairly easy to get the hang of. So easy in fact that this post is written with Blogpad Pro!

This is the closest word(!) I can think of to describe how I felt, when I turned on my main laptop yesterday evening.  The next few words were da*n, sh*t, bug*er, fu*k, bol*cks and many others, far too obscene to even asterisk out!

Yes, the day I had been dreading since early May had arrived. It was the day that the Windows 10 Anniversary update hit my main computer. There was no way of stopping it. I checked my settings, and see that the update had downloaded during the day sometime. Windows was now telling me that it would install the update at 03:10 the next morning. Ah ha …I thought. Windows is expecting me to leave my machine on for the update to take place. I very rarely shut down my laptop, as I prefer to ‘hibernate’ so it does not take too long to start up.

So here is me thinking that if I hibernate, then effectively my machine is not on and as a consequence the update will not happen. I felt that I was in charge. WRONG !!!!!

I came down this morning at around 06:40 to find my laptop was on and had had a proper restart. Those certain words that I had used the evening before had come into play again. The conversation going on in my head was quite something:

Positive me: The laptop has restarted without an error. That didn’t happen before, so it must be ok.

Negative me: Means nothing!

Positive me: Let’s have a quick look.

Negative me: It will have failed. There’ll be something wrong. Microsoft … pah.

This argument went back and forth for until I got back home this afternoon and could have a proper look.

It would appear, that all my misgivings were unfounded. Everything ‘seems’ to work as before. That is, that banking app  I was so worried about was working as it should.

Saturday was ‘Medication Review’ day. This in my opinion, is a bit of a waste of time. I’m currently on three types of medication: an anti-acid for my stomach reflux, an anti-coagulant for my heart valve and a beta-blocker to help my heart. Now the doctor has told me, and I have no reason to disbelieve him, that these are lifelong medications and it is something I accepted when they were prescribed. So why, every twelve months or so do I need to have a medication review? I suppose it is good that I get to see my doctor and he can see that I’m doing okay, but if a medication is lifelong…

My doctors’ surgery is in Tadcaster and many people will be aware of the events of Boxing Day 2015, when the ancient bridge was damaged in the flood. This is the only bridge in the town over the 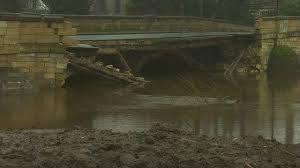 river Wharfe and it has literally cut the place in two. It is going to be rebuilt but is estimated to take at least 12 months to complete.

On a more positive note, work has commenced on building a, what I understand is a temporary footbridge close to the main bridge. This will go a long way to reuniting the two halves of the town.

I’m still struggling to find the best posting method for me. This post is being written in Word and I then intend to ‘copy & paste’ it into the WordPress desktop app. I like the desktop app, but would like it better if it had a spell checker. That was one of the better features of the old online editor which seems to be missing from the ‘newer’ online editor that WordPress tries to get me to adopt.

I suppose, at the end of the day, the best posting method is the one that suits the poster best. I still like the Word 2013 Blog Post template, but then again I really liked the Windows Live Essential Writer program (anyone remember when ‘apps’ used to be programmes?). The best thing that WordPress can do next, is to update the new editor to include some proofing tools. So if anyone at WordPress reads this … please