Now when I say ‘odd’ I mean they do odd things. Take this morning as an example. We occasionally get drivers who need to turn around and they very occasionally will use our drive to perform their turn. Although why they don’t use the small parking area accros the road, I will never know. It doesn’t happen often, in fact I can’t remember it happening this year. So, when I spotted a white car reversing into the drive, I thought little of it. I went upstairs to bring down the washing and after filling the machine and setting it going, I happened to glance out of the window. It was then I noticed that the white car was still in the drive, some 15 minutes after I first spotted it.

I went out to investigate. The driver was still in the car and was reading a book! I tapped his window and asked him “What are you doing?”. He told me that he was just awaiting his wife who was delivering leaflets further up the road. When I asked why he was in our drive, he replied that he didn’t want to wait on the road as it was on a bend and it was a new car! I couldn’t follow his logic and asked him to move. He told me he wouldn’t be much longer as he could see his wife. His wife then came around the corner, said hello and got into the car. They then drove off without even a thankyou or a ‘bye your leave’.

Some of you may know that I’m a bit of a knitter. It’s just a hobby and I’m not the greatest by any scale. It’s just something I like to do and (when it all goes right) I find it quite relaxing. I first learned the basic knit stitch from my grandmother when I was around 8 years old, back in the early 1960’s. My mother taught me to purl, cast on, cast off, increase and decrease. The rest is self taught from books originally, now I use the internet to learn anything new.

Early last year, a friend said I ought to join a knitting group or club. I do subscribe to a couple knitting related websites and I am an active member of a knitting help forum, but I had never really though of joining an ‘real’ group. My friend said it would help increase the awareness of male knitters. It has never bothered me that I am a male in what is now a mainly female area. Nevertheless, I had a look around and found that there were 4 groups within 7 miles of where I live. I looked at the website of one of the groups, which was basically a single screen with the address, time and day of the meetings. It was in a church hall, every third Thursday of the month from 18:45 to 21:00 and the banner at the top of the website said

“Come on in and say hello. First meeting is free!”

What did I have to lose? Well, it all went on quite pleasantly really. There seemed to be more chatting than knitting, but they seemed quite pleased to have me join them. Until the end, that is. I started to collect the coffee cups and was told to just put them on the serving hatch and L*** and J**** would wash them. They couldn’t have me doing the chores on my first night. So that’s what I did. I had just put the last 2 plates on the hatch when I heard to two ladies discussing someone. This is what I remember of the discussion.

Now, I know it may seem a bit arrogant to think that they were talking about me, but neither said goodbye when I left and I just had that feeling. (Firstly, I’m not gay and it is not something that bothers me in the slightest and secondly, my marriage is quite solid.)

I never went back.

The second experience, was another local group which was a bit nearer. I just had a telephone number and against my better judgement I gave the number a call. A woman answered and I said that I was calling about the knitting group. She asked me if I was calling for my wife! When I said that it was me that was looking to join a group the phone went quite for a few moments and then came the reply “We don’t have any men in the group.” I asked why they didn’t allow men, which is what it sounded like, she replied that the group was “ … a bit ‘pink’ and we tend to drink Prosecco and talk a lot about ‘women’s problems’ and things …”

After that, I gave up and didn’t even try the other three groups.

You may have seen the TV programme “Room 101” whereby so called celebrities talk about their pet hates. I got to thinking about my own pet hates and thought I might share some of them with you. So in no particular order:

People with little or no spacial awareness.You know the type I mean. People who are so wrapped up in their own space, that they forget that the rest of the world exists. There was a few examples yesterday like the man rummaging around in the charity shops with a large rucksack on his back. Bumped me twice and nearly knocked a china tea service of one of the display cabinets. Just didn’t seem to care! Then there was the two shoppers at the supermarket entrance. One had full trolley and the other had an empty one. They stood there chatting whilst at the same time blocking the entrance to the shop. Other shoppers were struggling to get in or out as this pair just would not shift. I had the same experience when a person stopped at the top of the escalator to answer their phone. The rest of us could just get past, but it could have been dangerous.

Parents who let their offspring take toys to the shops. Now this really does wind me up. I can understand a

young girl taking her dolls pram round the shop. That might be a learning opportunity, but I don’t see there is a need for a child to take his scooter, or worse a bicycle around the local supermarket. Then there are the kids wearing those shoes/boots that have a wheel embedded in the sole. Roller shoes I believe they are called. Why wear them to shop in? In fact, what is the [point of them. I’ve even saw a wandering around with a football whilst the parent was Googling which wine to buy.

Inconsiderate parking. Especially those with large vehicles that park at the side of my small one. When I parked yesterday, there was nothing at either side of me. When I returned about an hour later there was a huge Range Rover to the left and what seemed a very long Volvo to the right. I just could not see to reverse out. Then there was the car that parked on the exit road from the bus-station in Wetherby. He was on a double yellow line, with his flashers on and the driver had just nipped into one of the local shops. What they didn’t seem to understand was that the parking restriction is there so that the busses can get out easily. Then there are the idiots who stop on blind bends just to answer their mobiles. Okay don’t answer whilst driving, but find a safe place to stop. Safe for you and for the rest of the road users.

To all of you, just think of what your actions are causing for other people

I’m tempted by one of these. This particular one is only around £6 or £7 from eBay and I’m trying to convince myself that I need one. My car doesn’t have the facility but I think it may be a good idea. K***s initial reaction was to laugh and then laugh some more! You see, I don’t use my 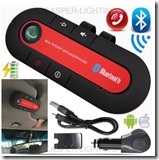 phone that much to make calls, and not many people seem to want to call me. Everyone seems to want to use text, Facebook Messenger and now WhatsApp. I tend to only answer calls if I know the number. I’ve had some many calls in the past where the caller either hangs up without speaking or they try sell me something. My idea is that , if it is important, then they will either leave a message or call back and they never do. To prove my point, the last time I answered an unknown number, I was advised “… the chances of successfully win my damages claim was around 95% …” I had no damages claim. It was a scammer. I let them go on for a few moments and they described my recent motor accident (which I have not had). It was when explained that all I needed to do was log onto a certain website and the $1,000,000 (dollars not pounds) would soon be in my account, that I decided to hang up. I blacklisted the number along with all the previous ones, after looking up the number on one of those “Who Called Me ..” websites.