Sometimes, things happen that are quite honestly “Beyond Belief.” Our youngest son sometimes proves that. R… is 28 and Autistic. We are gradually phasing him in to full time residential. At present he goes on Monday morning and returns 11 days later for a weekend visit. He gives us the impression that he really enjoys  his life there.

He has a regular care-team, his own flat and his own motorbility car. During the ‘lock-down’ he went on the 23rd March and did not return until 10th July. Then again he went on the 19th October and was not allowed home, under the rules until 11th December.

All this, he seemed to take in his stride. In fact, we were more stressed and traumatised than he seemed to be. His care team kept us well informed  and rang everyday to let us know what he had been up to and with a weekly FaceTime we just about got through it.

Now the interesting thing is that his daily life there is different to here. He does things there that we could never even dream he would do. When he is here, his daily routine is to sit in his room, with his laptop and TV. He will come downstairs for his lunch, then goes back to his room and that is it. Occasionally he will come back downstairs and use my laptop for a while.

Whilst in his flat, and this is the thing that amazes us, he takes on household jobs. We have photos of him mopping his kitchen floor, cooking his dinner (usually beans or sausage rolls) loading the washing machine and various other tasks around the place.

He was able to come here for Christmas, although there were times when it looked impossible, but his care-manager and all the teams put enough precautions in place for it to happen, so on Christmas Eve he came home. He would have had to come here anyway as he has a hospital appointment on Tuesday at which his legal guardian (horrible phrase) has to be present.

Now, on Christmas morning, we witnessed first hand something 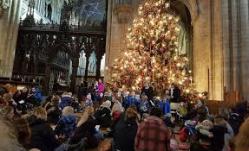 that completely amazed us both. In fact, I still cannot get my head around it. My wife and me were downstairs getting things ready, as you do when I that he hadn’t had his morning drink of milk. I took his cup upstairs.

There was some typical Christmas church music playing and I assumed that my wife had not turned the radio off. How wrong I was. Normally, he would have one of the children’s channels on his TV , and he would also have a children’s YouTube video playing on his laptop. 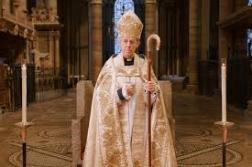 Not today. The TV was turned down and he had on his laptop a video of a Christmas church service. This played for an hour and a half before he started another similar video. I later found out that the first one was the Christmas Eve service from Lichfield Cathedral from 2000 and the second one was the previous nights service from Canterbury Cathedral.

By lunchtime he was back to watching old episodes of The Telly Tubbies as if nothing had happened. He did used to go to the local church to see the Christmas service when he was a school, but how he made the decision to watch that kind of video at that particular times, amazed us both

One thought on “Beyond belief …”