About six months ago, I was preparing our Sunday meal when I had an idea. We were having tray bake (we don’t do traditional 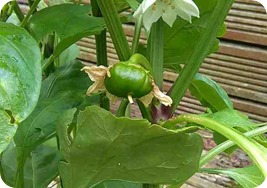 peppers, courgettes, onions with new potatoes and chicken thighs all mixed with olive oil and crushed garlic. I’ve got a picture somewhere but not sure where. Anyway, to the point. I was just about to throw the bit of the pepper that you don’t use, in the bin when I wondered if the seeds would grow. I’ve never had much luck with growing stuff from seed, but I thought I had nothing to lose. Within a week, the seeds had started to grow, and within a month I had nine small plants. Now six months on I have nine larger plants, with flowers and the first showing of some peppers. This has totally amazed me as I never even thought he seeds would grow. We shall see what we will get.

Today is the first day of the 2018 “Leeds Festival” or as it is known locally “Leeds Fest”. It is one of the large music festivals that happen over the year and it runs at the same time as the “Reading Festival”. Both have the

same acts over three days. Leeds is held at Bramham Park, which is extremely close to where we live. I have been back in 2011 and 2012 as local residents are allowed to purchase concessionary for the whole three days as part of a compensation pack. What happens is that the organisers donate a number of tickets to the parish council of Bramham, Clifford and Thorner (who are the most affected) and they sell them to the residents at a vastly discounted price. I think this year, the tickets were in the region of £40.00 for the three days in what is called the Guest Area, which is a much better camp-site then the general public get. So we get a few days of traffic disruption, a bit of disturbance during the night from the music and the local area gets some extra funding. As mentioned, I did got to the 2011 festival, and have great memories of dancing to Madness and seeing Ed Sheeran as an up and coming newcomer. There is a YouTube video of a band called “Bring Me The

Horizon” or BMTH, finishing their set with a massive ‘circle pit’. The sound is pretty bad but, I can say that I was in the midst of it and it was as scary as it looks. From what I can remember, I was towards the bottom right when you look at the video. The guy next to me, at the time said I was in the ‘wrong place at the wrong time’ and advised me that the safest thing to do was to run !! K*** says that it would kill me if I did it now … it nearly killed me then!

I had a ticket for 2012, but the weather was very wet, and I was not that desperate to see many of the bands so I gave most of them a miss. Although I did get to see Foo Fighters, The Cure and Florence And The Machine, so not all that bad.