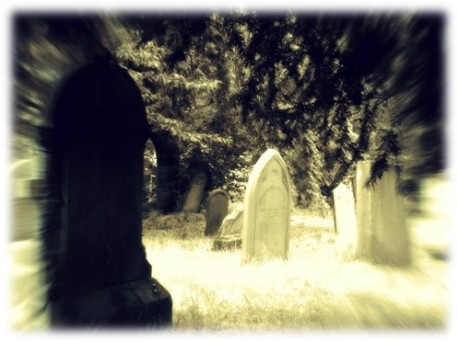 Firstly, at the risk of advertising my age, I am no David Bailey when it comes to photograpy.

Now that’s out of the way, I took this picture some time ago. It was captured in the churchyard of All Saints Church in Bramham. It was quite a bright sunny day, so the original looked quite bland and boring, even in monochrome. Before anyone says ‘Photoshop’ it was edited in Google Picasa. It was taken with a Panasonic Lumix camera, but I won’t bore anyone with any more camera specifics. As I say, it started life as a black and white, or monochrome image. It was then edited to make it sepia and look aged. Still not looking great I applied a few special effects. First one was to enhance the highlights of the image, which made the central headstone a lot brighter. I then used a soft focus filter to soften the edges added a bit of film grain effect and there we have it. Spooky!

This my first real attempt at using a photograph to stimulate or inspire me to write a post and I think, at this early stage that it works up to a point. It’s a photo and I’ve written something, so job done. Now I need to decide whether I write about the image/photo or just use it as a reference for the rest of the words I write. I’m still not sure which would be the best way to go, if in fact I carry one with this. I’ll stop now, as I may be on the point of rambling.