As I understand it, last week was supposed to be the most miserable week of the year! Was yours? Mine certainly wasn’t. Where do these experts get these ideas from. For me, the most miserable week was the three days between Boxing Day and the 30th of December. It seemed to be three days of colleagues moaning about being at work for three days because ‘there’s nothing to do’. Then they started again the first full week back, moaning that ‘there’s too much to do’.

I think Mrs H has been ripped off. Last year she bought herself a cycle. It is one of those sit-up-and-beg’ type of cycles, with a basket on the front. Not what I would 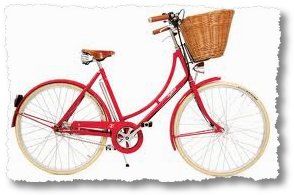 buy, but it is what she wanted. It is like this one but a darker red. Well after the first couple of trips out, she got the idea that she would like to know how far she had cycled. I said I would have a look online for a cycle computer, knowing that I could get one locally for about £12.00. However, she decided to go back to the shop she bought the bike from and ask them. They sold he one that cost, in the sale, £39.99!! Well when she showed me, I immediately thought that it was more than she needed. It had been reduced from £49.99, which made me wonder if it was because they could not sell it. Anyway, I opened the package and took out the parts, found the instructions…in all 26 languages. Identified the ones nearest to English, or should I say Engrish, and began to study them. After about ten minutes of trying to understand some of the more bizarre set-up instructions, I gave up and put it all back in the package. This was not what Mrs K needed. One of the instructions was this:

This will be the size of your wheel. Have they never heard PIxR squared.

After Christmas back, we took the thing back. Mrs H had also bought a wing mirror for the bike. When we tried to explain that it was more than she needed, the owner pointed out that it was the best in the shop, and that we did not need to use all the features. We also complained that the mirror seemed to have some part missing, to which the owner pointed out, that it was only a basic mirror and we should not expect much. I have to ask myself his motives here. A piece of equipment that is a luxury, he sells the best (most expensive) item. For something that is a safety feature, she gets the basic model. We came home without changing anything. He convinced Mrs H, that she had got what she needed. I was saying nothing. It was her decision. I would have asked for a refund.

So today, I made an attempt to fit the cycle computer. All the parts seemed to be in order, and once I had deciphered the instructions again, I began. Everything was okay, until I tried to fit the actual computer. It would not fit. You see, it is sort of wireless. In fact it is infrared. So that means the computer needs to be in direct line with the sensor on the wheel. As the cycle has a basket, this would not be possible with out removing the basket, which defeats one of the reasons she bought the bike. Mrs H will be going back to the shop once more. This time for a refund.

On a different note, I may be creating a website to hold my writing. It is not definite yet, as at the moment my WordPress blog seems to be working out. We shall see. Don’t forget to take a look at the two that are there now, and make any comments.