I’ve given up…the heating is on. I don’t usually put it on during the day, but I have succumb this once. It’s been really cold over the past two days. The ground frost never cleared at all yesterday, and it was quite 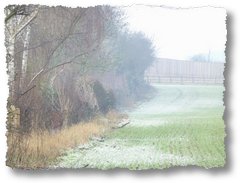 eerie driving, early this morning, through the frost laden mist. Still hasn’t cleared yet. Just been out (14:30) 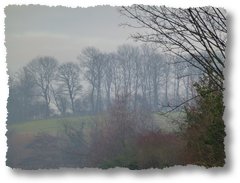 and took a couple of photos in the fields. Should have gone first thing when I got back.

Talking of eerie, it was very strange picking S**** up last night. It was his friends birthday yesterday, and S**** had been invited to do what is colloquially called ‘The Garforth Gallon’. Basically, a pub crawl, where you have a pint of beer/ale/lager in each of eight pubs in the town of Garforth. For those who may not know, a ‘pub crawl’ is an expression used when you visit a number of public houses in one session. Anyway, he went out around 1pm, and was out all day and evening. I went to pick him up at around 10:30pm. It is not far, only about 10 minutes from home, but the motorway (M1) was quite spooky and quiet. I have not driven in that direction, at that time of night before, so it was an experience. When I got to Garforth though, it was very different ….busy, noisy even rowdy, with a police presence, larger than I’ve seen outside Leeds City centre. The police presence may have had something to do with the alleged murder that had taken place in the afternoon http://preview.tinyurl.com/7kj7u7a. Still he had had a good time, was able to get up for work this morning.

I have just finished reading ‘Little 15’ by Stephanie Saye and did a review on Amazon (UK) you can find it here http://amzn.to/xiNTLX. I very much enjoyed the book, and would recommend it to anyone. It is the only book, I have actually bought for the Kindle, and it was well worth it.